Today's “Redemptive Anti-Semitism” - the "Gentlemen's Agreement" is no more

We are seeing the rebirth of Nazi "redemptive anti-Semitism” where all the world's problems are solved by exterminating and purifying humanity of the Jews. Listen to what they are saying. 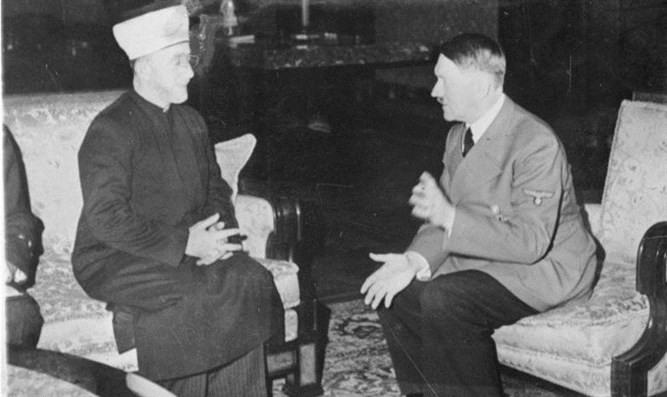 This past week in Israel, and for the Jewish people throughout the world, the Jewish nation as a whole commemorated Holocaust Martyrs' and Heroes' Remembrance Day and tomorrow we will conclude the seven day period by commemorating Memorial Day for the Fallen Soldiers of the Wars of Israel and Victims of Actions of Terrorism. These days of commemoration give personal and collective significance to the 6 million Jews that perished during the Holocaust and give respect to the soldiers here in Israel that have sacrificed their lives so that Israel can be a sustainable and thriving homeland for the Jewish people. A home for all Jews at times of need.

Today, 77 years after the Holocaust, for most Jews in Israel and throughout the world, remembering and commemorating the Holocaust is a fundamental component of what being Jewish means to them. For most Jews everywhere, the sacrifice of fallen soldiers serving in the Israel Defense Forces unifies the Jewish nation as one large extended family who have lost a son or a daughter. Yet, despite history being supportive of our collective historical narrative and Israel becoming a nation admired and respected throughout the world, we have witnessed this past year a kind of pinnacle of anti-Semitism everywhere making the leap from harboring anti-Semitic thoughts to physically attacking Jews, desecrating Jewish institutions, cemeteries, JCC’s. Anti-Semites have in a short span of time created an atmosphere of fear and intimidation that Jews are conscious of whenever they leave their homes. Today Jew haters feel empowerment from many sources whether on social media or the printed and broadcasted media and have become more will to act and commit a violent attack on any Jew that crosses their path.

In what is commonly referred to as “the good old days”, someone who hated Jews "more than was necessary" was defined as a true anti-Semite. American Jews did not condone it, but lived with it and even thrived. For the past century America was a “safe haven” for American Jews enabling the Jewish community to reach the highest pinnacles of almost all fields of endeavor. Yet with the continuing daily anti-Semitic attacks in New York, Los Angeles, Toronto, Paris, London, and Berlin reaching unprecedented proportions, an updated understanding of how the old or classical anti-Semitism has evolved into the new anti-Semitism namely, “Redemptive Anti-Semitism," is due. In the past we were accustomed to the classical type of anti-Semitism, the “gentlemen’s agreement” type of bigotry and discrimination against Jews; residential restrictions, academic restrictions, cultural restrictions, and employment restrictions. We have entered a new era of Jewish hatred that resonates from the past.

As we move back to the future, and as Jews are hunted down and attacked violently in broad daylight on the streets of major cities in America, Canada and Europe, all you have to do to understand this new phenomenon is listen to the declarative pronouncements made by these barbaric mobs of American and European Muslims and Afro-Americans as they viciously attack Jews arbitrarily, viciously, and for no other reason than the fact that they are Jews. They want these Jews to die and they want to annihilate the Jewish community as a whole. These vicious barbarians want to “kill the Jews” with their own bare hands and show their actions to the world through social media.

A relatively unknown historical manifestation links together the radical anti-Semitism of the Nazi ideology and the modern day Jew hatred by radical American/European Muslims and radicalized Afro-Americans. This common bond of “purifying” humanity of any Jewish presence promoted and upheld by radical Islam and the Nazi ideology now spans more than a nine decade period. We can no longer deny the nearly identical ideological and doctrinal models used by the Nazis and modern day radical Muslims and radicalized Afro-Americans who promote the killing of Jews and demand the total annihilation of the State of Israel. The common thread unifying the desire for the total destruction of Jews is shared by both radical Muslims alongside radicalized Afro-Americans and Nazi ideology.

Nazi ideology spoke of “redemptive anti-Semitism”, namely a form of anti-Semitism that explains all in the world by offering a form of “redemption” by exterminating and purifying humanity of the Jews. Islamic religious and political leaders broadcast daily sermons of incitement to murder Jews, promising heaven and redemption for those that carry out this call to rid the world of Jews.

Redemptive anti-Semitism” is a theory expounded by the Holocaust historian Professor Saul Friedländer. He maintains that Nazi anti-Semitism was distinctive for being “redemptive anti-Semitism”, namely a form of anti-Semitism that could explain all in the world and offer a form of “redemption” for the anti-Semitic person. Friedländer spoke about a specifically Nazi aspect of anti-Semitism. That's the belief in a racial hierarchy, with the "the Jews" at the bottom. It holds that everything wrong with the world, and everything wrong with people, is a result of the malign influence of "the Jews." According to this idea, exterminating the Jews will prevent them from corrupting the world any further and will enable people to be redeemed and purified. Friedlander’s use of the term "liberation from Jews" begins with attacks, the expulsion of Jews from their homes and communities and ends with their physical annihilation.

The connection between modern day Islam and the Nazi regime in Germany runs deep, as the Nazis did their best to support through finance and advice the embryonic radical Islamic movements in British ruled Egypt and Iraq through the late 1930s and early 1940s. A key player was the Grand Mufti of Jerusalem, Haj Amin al-Husseini. The Grand Mufti of Jerusalem, Haj Amin al-Husseini met covertly with representatives of the Nazi SS intelligence arm during the late 1930s, and not coincidentally with Otto Adolf Eichmann, who was a German-Austrian Nazi SS-Obersturmbannführer (Lieutenant Colonel) and one of the major implementers of the Holocaust’s systematic annihilation and extermination of European Jewry. Eichmann played a central role in the deportation of over 1.5 million Jews from all over Europe to killing camps and killing sites in occupied Poland and in parts of the occupied Soviet Union.

With the British Mandate intelligence services becoming aware of Al-Husseini’s clandestine activities, he fled to Germany for the remainder of World War II, remaining active as a propagandist and recruiter of Balkan Muslims into the Waffen SS Handschar and Kama Divisions, used extensively in the latter part of the war, as German manpower available for combat divisions declined. An interesting footnote to Al-Husseini’s family lineage; Yasser Arafat, the deceased mass murderer wgi was leader of the Palestinian Liberation Organization, an organization that was dedicated to the murdering of Jews and the destruction of the State of Israel, was a first nephew of Al-Husseini.

Social media tweets and comments such as “As long as there is Jewish life in the world, peace is not possible.” have become the new norm and “redemptive anti-Semitism” will continue to empower Muslims and Afro-Americans to continue their crusade to free humanity as they understand.

There is no Jewish conspiracy to dominate the world, but there is a widespread global anti-Jewish conspiracy based on the principles of “redemptive anti-Semitism”. It starts with the Jews but it does not end with the Jews. The first airplane that was hijacked was an Israeli airplane, and today at every airport at every country in the world, we now we line up for security checks, so the world should be concerned. The danger of dismissing the inherent threat of “redemptive anti-Semitism” lies in its danger for the whole world. Until then, Jews will continue to be the “canary in the mine” and bear the brunt of this new/old form of anti-Semitism.